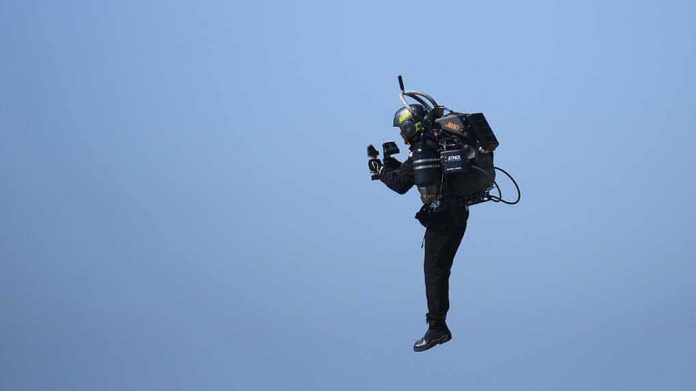 (ConservativeStar.com) – At first, the idea seems like something out of Buck Rogers or one of those campy 1950s sci-fi movies, but the Pentagon is seriously looking into the use of jetpacks for military uses. Technically, they’ve asked for feasibility studies for a “portable personal air mobility system” which would also include powered gliders and wingsuits (like BASE jumpers use).

The military wants these one-person units to fit in a bag carryable by no more than two people, can be set up in less than 10 minutes, and easily taught to personnel that’ll be using them. One intended use would be to deploy Special Forces (Navy SEALs or Army Green Berets for example) in friendly territory and allow them to infiltrate; or, as the Royal Navy tested, as combat armor used to swarm and capture seagoing vessels.

#FunFactFriday – The Royal Navy has been testing Jet Suit assault teams to determine if the Iron Man-like suits could be used to rapidly swarm and board ships. U.S. Special Operations Command is also evaluating a jetpack that can reach speeds of more than 200 mph. pic.twitter.com/mo5FoGWkDu

It may seem wasteful to some to spend that much money on what they view as far-fetched ideas that would never work in the real world. However, there would be no submarines if someone wasn’t inspired by Jules Verne, nor cell phones if someone hadn’t seen the communicators used in Star Trek. Innovation is what keeps us going, especially in the military.