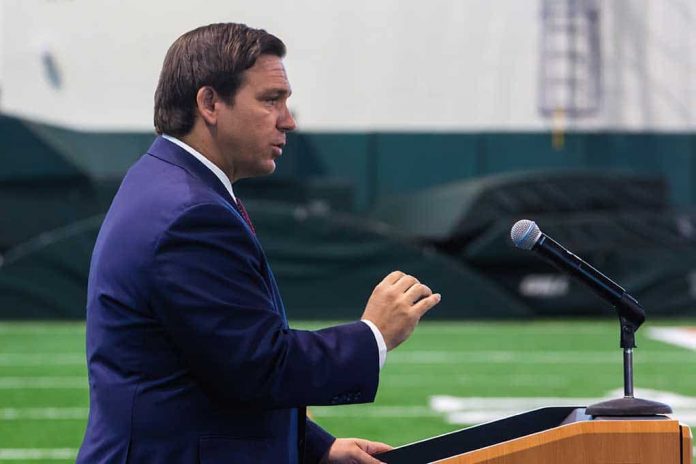 (ConservativeStar.com) – On Saturday, July 17, Florida’s Republican Gov. Ron DeSantis traveled to Texas to meet with his officers and discuss Florida’s continued assistance at the Southern border. DeSantis and Texas Gov. Greg Abbott (R) held a press conference, where DeSantis discussed the success of the joint venture.

Abbott and Arizona Gov. Doug Ducey (R) recently sent out calls asking for assistance to secure the Mexican border in their states.

The # of illegal border crossings this fiscal year is already the most since 2006. This is a crisis, our law enforcement professionals need help.

In response, @GovAbbott and I sent a letter to all US governors requesting law enforcement support along the border in our states. 1/ pic.twitter.com/U0dywS6XBz

When @GovAbbott sent out a call for help to secure our southern border, Florida answered. Today, more than 50 officers from Florida state law enforcement are deployed in Texas, fighting human smuggling and drug trafficking at the border. pic.twitter.com/5FDbqjJakI

DeSantis told reporters Florida officials “assisted with the apprehension of 2,800 illegal aliens,” a figure he called “eye-popping.” The two men held a press conference where DeSantis praised the efforts of officers. The governor also announced Florida National Guard members would remain in Texas until October 2022.

Florida may have been the first state to answer Abbott and Ducey’s calls, but it likely won’t be the last. So far, Republican governors from five other states have sent law enforcement officials or National Guard troops to Arizona and Texas, including Arkansas, Iowa, Nebraska, Ohio, and South Dakota.

President Joe Biden all but took a wrecking ball to his predecessor’s border security measures. He canceled former President Donald Trump’s declaration of a state of emergency at the nation’s southern border and halted construction of the wall. As a result, the nation faced an unprecedented crisis, one the Biden administration appears unable or unwilling to correct.