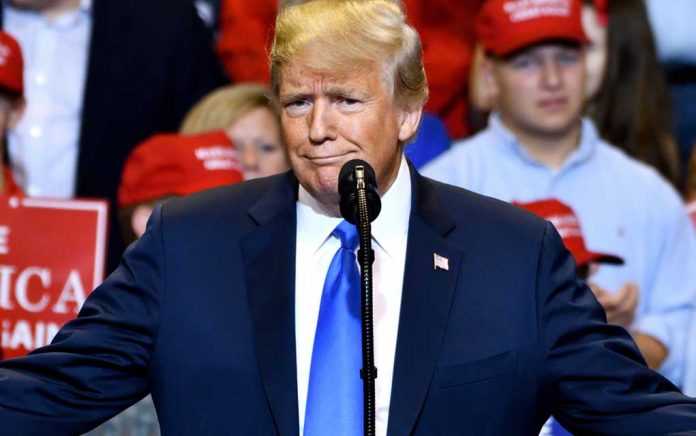 (ConservativeStar.com) – During the Democratic National Convention (DNC), the Left used a barrage of attacks aimed at President Trump in an attempt to contrast him with their nominee, Joe Biden. Despite their attempts, though, they didn’t intimidate Trump. Throughout the week, the president made untraditional campaign stops to use the bully pulpit during the Democratic convention in Minnesota, Arizona, and Pennsylvania — all states Trump wants and needs to win in November.

Now that the DNC is over, and they had their chance to make their case to the American people, it’s Trump and the GOP’s turn. On August 24, the Republican National Convention (RNC) will begin. It’ll also be held virtually due to COVID-19 concerns.

On Thursday, August 20, Trump stopped near Biden’s birthplace in the battleground state of Pennsylvania. Hundreds of supporters greeted the president. The streets were filled with people waving Trump/Pence signs and flags, and there was patriotic music.

In the context of COVID-19, Trump offered a preview of what those tuning into the RNC might expect next week. He talked about the traditional issues of taxes, gun rights, immigration, abortion, energy, school choice, and public safety.

However, in the sharpest contrast between the two candidates, Trump talked about subjects that the Left and Biden ignored during their convention. He especially hit hard on the increase in violent crimes and destructive riots in Democratic-led cities, as well as the defund the police movement. While attacking the former vice president’s policies, Trump avoided attacking him personally. Instead, he stayed focused on Liberals’ destructive policies.

Riots and Defund the Police

Trump said to look no further than Minneapolis, Portland, or Chicago to see how American’s lives will change in a Biden administration. He asked those present to “imagine the mayhem coming to your town and every single town in America” if the Democrat wins in November.

Some are questioning, why do Democrats, and Biden, want to increase gun control and reduce police? The impact of the two policies reduces a citizen’s ability to defend oneself from a criminal who knows police likely won’t be there to protect them from becoming a victim.

Expect this to become a major theme at the Republican convention.

Trump also called on Pennsylvania’s Democratic governor, Tom Wolf, to open the state’s economy. The president sounded a familiar warning from this past spring when he said the cure couldn’t be worse than the disease. He emphasized that depression, suicide, and lost jobs were just as much a risk to Americans as COVID-19.

In light of what’s happened since COVID-19 in March from state government shutdowns and quarantines, destructive riots, and the defund the police movement — Trump said there was some “sanity four years ago.” Now the Left has “gone insane.”

On Monday the RNC kicks off for four nights. We’ll be covering the convention and giving you a Conservative analysis of each evening.