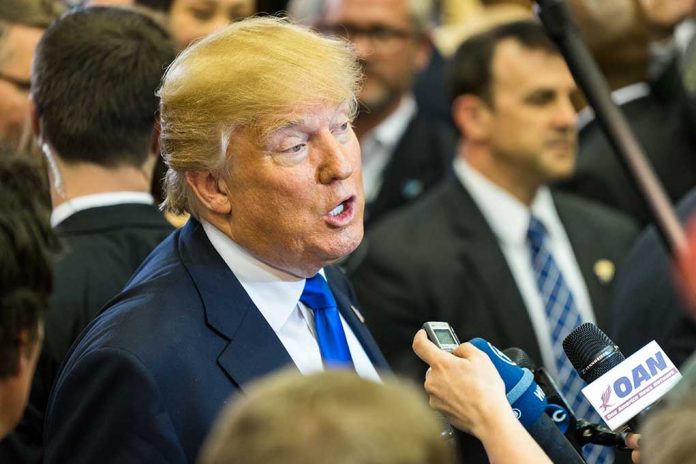 (ConservativeStar.com) – What’s the hottest topic in politics these days? Press Secretary Jen Psaki slipping up and finally calling the migrant problem with the Mexican border a “crisis?” It should be, but mainstream media is downplaying it. President Joe Biden staggering and falling climbing the stairs to board Air Force One? No, but it will probably be the source of many memes on the Internet. One person however is garnering a lot of attention — former President Donald Trump.

Without access to social media, the ex-president is turning to the method that was the mainstay when the Gutenberg Bible was first printed in 1455 A.D. — a typeset book. He’s set himself to the task of giving at least 12 interviews over the next 6 weeks to authors who have expressed interest in writing about him.

These writers have been invited to his Mar-a-Lago Club in Palm Beach, Florida. According to Politico, aides have said he could still back out of some. Additionally, they will not be one-on-one interviews, staffers would be present. Business Insider reported that some of the invitees have a less…than cordial history…with the man they’re coming to talk to.

Michael Wolff of the New York Times wrote “Fire and Fury: Inside the Trump White House” which may have been closer to fiction than fact as he publicly admitted. Then, there’s the Washington Post’s Philip Rucker, who the former president once called a “nasty lightweight reporter,” according to a screenshot of what’s purported to be his official Twitter account from when he was in office.

Some of his advisers are concerned that if the market becomes saturated with books about his administration, sales of any potential future autobiography could be hindered. There’s also the possibility he could be using them to keep his name in the forefront of people’s minds — including all of the attacks by leftists — to keep his voter base engaged for the 2022 midterm elections.