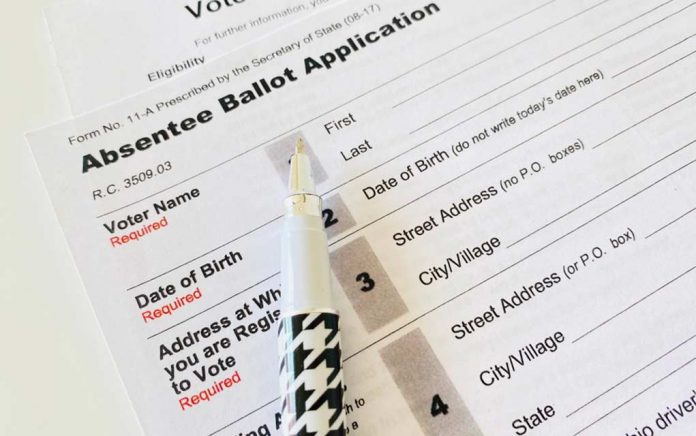 (ConservativeStar.com) – The people of Michigan are facing lockdown orders that keep getting extended, regardless of what legislators say. The latest extension goes to June 12. Many are opening businesses back up without permission, and several police departments have refused to enforce the governor’s restrictive policies. Now, at least one state official is using the pandemic to trample voter rights.

On Tuesday, May 19, Michigan’s Secretary of State, Jocelyn Benson, announced all voters would be receiving absentee ballot applications at home. Benson later tweeted that she used CARES funding to pay for the expense of mailing them out, saying that Michiganders could stay healthy and vote at the same time.

Sounds reasonable to some, there’s just one problem — what she did is in direct violation of the Constitution of Michigan.

Now, thanks to the secretary of state, citizens who are already financially strained may face even more issues. President Trump has stated he may refuse to offer federal funds to the state because of the constitutional violation.

This latest act by Benson also has residents concerned that this may be a ploy to mismanage ballots during the election.

Absentee Ballots Are Legal in Michigan

Residents of Michigan do have the right to submit absentee ballots. In fact, over a decade ago, an amendment to the constitution gave citizens the right to vote from home without explanation.

Voter laws in Michigan outline the specifics of how voters might secure an absentee ballot. The state has to make the applications available to residents after they request it by voice or mail.

A State in Turmoil

Governor Gretchen Whitmer (D) is already facing multiple lawsuits for rights violations. This move may make the state a target for even more. When Whitmer extended the lockdown without permission from her legislature, she violated the part of the constitution that limits the governor’s ability to declare a state of emergency beyond 28 days.

It’s hard telling how this story will end. Lawsuits are bound to flood states like Michigan, but tensions are rising and they may go beyond the courtrooms. At the very least, they’re most likely going to make it to the polls.