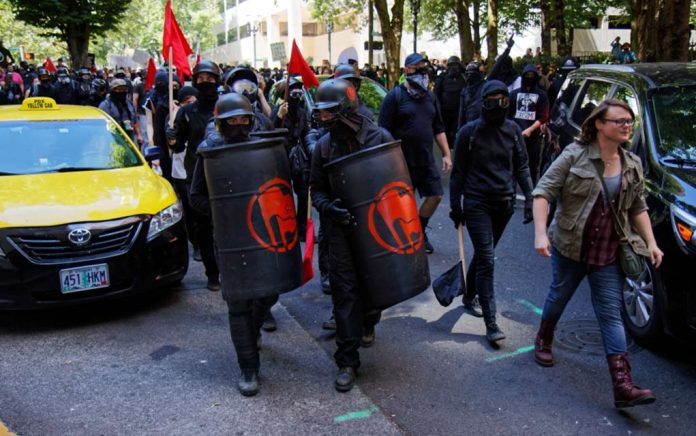 (ConservativeStar.com) – On September 3, in the streets of Portland, Oregon, Michael Reinoehl, a self-professed member of the radical group Antifa, allegedly stalked and killed Aaron Danielson. The crime? He was simply wearing a hat that represented a group on the other end of the political spectrum. Now, Professor Erik Loomis, of the University of Rhode Island, has shocked people with his response.

The professor reportedly said there was “nothing wrong” with Reinoehl’s actions.

University of Rhode Island Professor Erik Loomis reacted to the execution of Trump supporter Aaron “Jay” Danielson on the streets of Portland by an Antifa extremist by commenting, “He killed a fascist. I see nothing wrong with it.”https://t.co/afj8dGlCSj

Loomis seems to revel in the notion that such lives are now inconsequential and can be taken for purely tactical reason. It is the liberating element decoupling from the confines of morality: Loomis and others can assume a license for violence, even murder.https://t.co/fJ6Qsa87rI

This is one of the more heinous statements made by someone on the Left, but perhaps it shouldn’t come as a great shock to anybody who’s been paying attention. After all, it’s coming from somebody of the same group that portrays riots as “peaceful protests,” and both make moves to defund the police and hamstring them in trying to control the crowds intent on arson and looting.

Liberals have seemingly embraced the idea that allowing anarchy to reign free is the best way to achieve their goal of disrupting President Donald Trump’s administration. What they might plan to put in place of the current system isn’t obvious as yet, but if history is any indication, then the names Joseph Stalin, Mao Zedong, and Pol Pot need to be remembered.