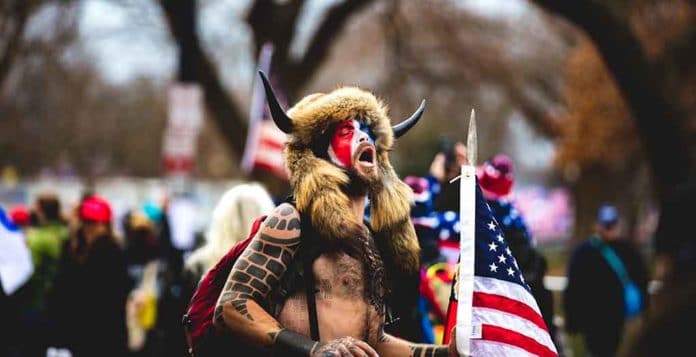 (ConservativeStar.com) – After the tragic events that took place at the Capitol Building on January 6, a few images stood out as emblems of that fateful day. One was of a shirtless protester sporting a fur hat with horns, his face painted in the colors of the American flag. That man’s name is Jacob Chansley, and the prosecutors in his case have decided they want him to face stiff punishment.

On Tuesday, November 9, a sentencing memo concerning Chansley’s case recommended he go to prison for 51 months, the maximum under sentencing guidelines. That’s the longest recommended sentence out of any of the January 6 cases to come before the courts so far.

BREAKING: Prosecutors are seeking a prison term of more than FOUR YEARS for the ‘QAnon Shaman.’

Do you think that’s too harsh or not harsh enough? 🤨

Known as the “QAnon Shaman,” Chansley is a supporter of the online group. Upon entering the Capitol, he wrote a threatening message to then-Vice President Mike Pence on the Senate rostrum. Chansley pleaded guilty to obstructing congressional efforts to certify the 2020 election earlier this year.

In the prosecutors’ court filing in relation to Chansley’s sentencing, they allege he had become the “public face” of the events of January 6. They further claim he was “riling up” other protestors by making obscene criticisms of federal lawmakers. Chansley does not stand accused of destruction of government property or assaulting a member of the police.

Do you think it’s fair that prosecutors want to give him a longer sentence?